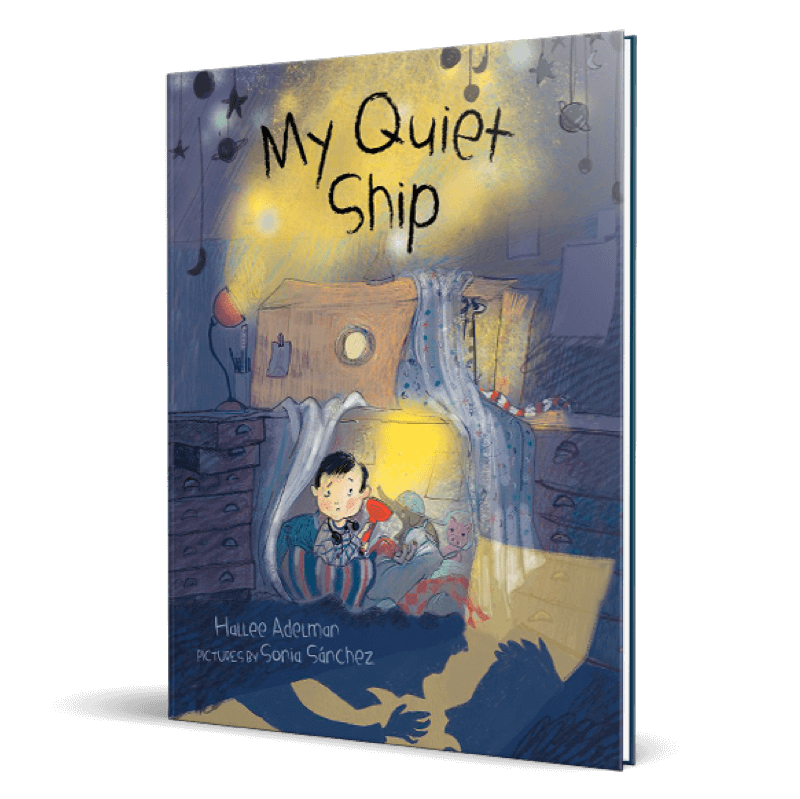 "An important and necessary story when it comes to helping children find their voices... excellent."

Whenever the yelling in his house starts, Quinn uses his imagination to become Commander of the Quiet Ship. There he pretends to travel far, far away from the yelling sounds. A thoughtful treatment of a difficult topic, this story is for children or families whose home is sometimes filled with sounds that they’d like to quiet down.

Available In Stores and Online
Press

Children use the power of their imaginations to create fabulous worlds, but Quinn uses his to escape whenever his parents yell. This young boy gathers his spaceflight supplies and crew, which consists of stuffed animals, pillows and things to draw with, and buries himself in a cardboard box for blast off whenever his parents argue. The rumbling of his spaceship drowns out the yelling as he sees the universe and explores other planets. However, one night, the yelling is so loud that it breaks his Quiet Ship.

Sánchez (Here I Am) uses a combination of traditional and digital brushes to evoke fear and the idea of safety. On one spread, Quinn attempts “to draw happy pictures to forget about the sounds” that make him sick. Jagged lines reach across an enveloping blackness toward the warm glow of his flashlight inside his Quiet Ship, mimicking his parents’ argument and his small attempts to escape. Adelman fills an important need, and her prose, paired with Sánchez’s revealing art, showcase Quinn’s very real fear.

Quinn eventually gets mad at the yelling and enters the room where his parents are. They stop, in silence, as he finally tells them to stop yelling. Later, his parents enter his room and kindly, quietly talk with him about his fears. There is certainly a great demand for picture books about emotional awareness and trauma, and this idealistic depiction will fill that demand. This is still, however, an important and necessary story when it comes to helping children find their voices.

VERDICT
An excellent purchase for any public library and a first purchase for those who work one-on-one with children in traumatic situations.